My daughter loves to help out in the kitchen, especially with baking, so she asked for a cupcake themed birthday party.  We came up with four designs to teach her friends that were cute, but simple enough for the kids to do on their own.  Most of the girls were 7 – 8 years old and the party was a hit!

We made suns out of candy corn and added faces with black frosting.  I let the kids use pastry bags for the details.  The lady bug was made with a candy melt for the face and edible googly eyes.  The spots were chocolate chips.  The owl was a favorite with the kids.  I cut candy melts in half for the feathers.  The eyes were made from candy melts, white frosting and chocolate chips.  The beak was a candy corn. The last cupcake was a chance for the kids to practice swirling the frosting with a fancy tip on a pastry bag.  They had tons of sprinkles to choose from for decorating.

Here is the birthday girl with her completed cupcakes.  One of my favorite things about the party was the fact that each guest brought home their four cupcakes in a cute box.  They were all proud of their creations and excited to bring them home to their families. 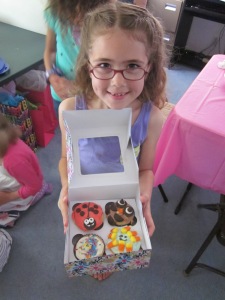 The birthday cake that we served at the party was a giant cupcake made from a silicone mold.  I had trouble getting the cake out of the silicone mold, which surprised me.  But, once I pieced the cake back together it still resembled a cupcake. I wrapped the bottom with my marshmallow fondant  to look like  a cupcake wrapper and just swirled icing around the top half.  Here is the birthday girl with all of her cupcakes!